Jyn is a unique hero of the Sniper class and originally a character from Strike Force Heroes 2. He can be unlocked by completing Watch Your Back on Insane difficulty.

Jyn was part of the team along with Nathan, Dex, Tower and West. One day when a new hero Wesley came to their base, he was playing video games when GlobeX broke in the base. The team defeated them. Nathan and Dex went to the Asian market to find The Scientist while Jyn and Tower stayed in the base to protect it in case of another break-in. When Dex came back to the base, he killed West so the squad realized he works for GlobeX. Nathan, Tower and Jyn pursued Dex to try and prevent him from killing Iagi; they didn't succeed. Eventually, the team traveled to space in order to install a signal that would shut down most of the clones. When they returned to Earth, Jyn was captured by GlobeX along with Nathan and Tower.

Jyn was reprogrammed by the Scientist who took over GlobeX corporation. He became one of the GlobeX army leaders along with the other captured SFH members.

Jyn's selection of Offensive Upgrades make him an expert marksman. Selecting all of the Offensive Upgrades and equipping him with a powerful sniper such as Rehab or AWP will allow him to hit extremely hard at long range. A headshot, especially with the AWP, will kill all but the toughest enemies or those with Adrenaline. Jyn's personal Flaw may seem problematic, but as long as he maintains distance, there is not much most enemies can do to harm him. His Killstreak, Wall Hack, lets Jyn easily establish map control. On small maps such as Street, it becomes a total map lockdown.

Jyn is not nearly as effective with Experimentals, with the exception of the Fortune's 500. This is because most Experimentals have short range and force Jyn into close combat, his worst area of performance. Sniper rifles also have low ammo capacity, so consider using the Scavenger Utility equipment. Overall, Jyn is arguably the most powerful long range fighter in the game. Carefully aimed headshots are practically guaranteed to kill enemies and make him nigh impossible to fight at long distances. 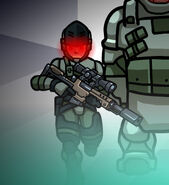 Reprogrammed Jyn in the intro cutscene

Community content is available under CC-BY-SA unless otherwise noted.
Advertisement