Can shoot the crumbs off the whiskers of a mouse from 400 yards out. Needs reading glasses, though.

Calamity is a unique Gunslinger. She is unlocked after completing Reverse Perfection on Insane difficulty.

Calamity first appeared in Strike Force Heroes: Extraction. There, she was an expert sniper.

She has Utility and Offensive Upgrades.

Calamity is an interesting Gunslinger who doesn't particularly excel at using either Duals or Snipers. Her flaw makes it difficult for her to play like a Sniper, but choosing the Extreme Focus upgrade can make well-aimed shots hit hard. Calamity's utility upgrades also improve her support capabilities; the combination of Muscle Memory and Long Lasting in particular makes her RoF Boost considerably more effective. Gun Play is a complex trait that is best used with low-ammo primaries such as the L115, but it can never used effectively by the AI, making it less useful compared to Inspire. Overall, Calamity is not a super impressive Gunslinger, but can definitely run along with or replace Sanchez. 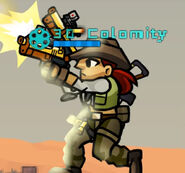 Calamity with the FMG9.

Calamity armed with a Popper.
Community content is available under CC-BY-SA unless otherwise noted.
Advertisement